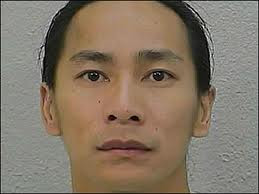 The suspect in a California home-invasion robbery that left four people dead, including the gunman, was a paroled gang member suspected in a separate shooting earlier that day, police said Monday.

Police identified 26-year-old Xue Lor as the suspect who fatally shot three people and critically wounded another before he was fatally shot during the attack in Sacramento around 10:30 p.m. Saturday.

Robbery appears to be the motive behind the killings, officials said.

Investigators believe Lor demanded money from the victims before he opened fire, killing a husband and wife who lived there, as well as a male guest identified as 33-year-old Lee Doua Cha.

Lor was shot by the dead couple's son, said Officer Michele Gigante, a Sacramento police spokeswoman. The son was not injured and is not under arrest, she said.

Mr. Xue Lor sounds like he was a good candidate for stiffer sentencing guidelines.  Plus, there's no denying he is the perfect example of why gun-rights folks preach what they do about home defense and stand-your-ground and all that.

The fact is however, this kind of incident is extremely rare. All the fear-driven preparations for such an unlikely event as this, result in untold numbers of "accidents," false DGUs and gun flow into the criminal world.